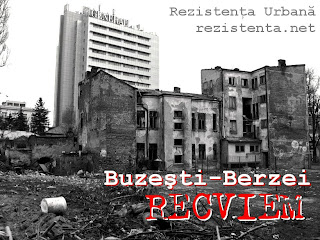 city embodies: it is a right to change ourselves by changing the city more after our heart’s desire. It

is, moreover, a collective rather than an individual right since changing the city inevitably depends

upon the exercise of a collective power over the process of urbanization. The freedom to make and

Demolishing   old buildings to give more place for cars

THE INITIAL PROBLEM AND CONTEXT

A Place Next to The North Railway Station

Master Plan of 2000 also included the idea of a better circulation on this North-South axis but this was not a detailed plan yet.

The problem started in 2006, with the approval of an urban planning documentation aiming at the enlargement of the two streets. It was not a complete Zonal Urban Plan: it was not based on the necessary sets of data and analysis that should have been made for an urban planning documentation and did not provide any urban regulations for the remaining plots after the demolition and the permits for the Ministries.

The modernization of this axis was first mentioned by the 1935 development plan of Bucharest representing the objective to make the city of Bucharest a capital city for a relatively new nation state at that time.

The Plans of the 1930s aiming at the modernization of the city of Bucharest had been elaborated before the huge demolitions accompanying the construction of the House of the People, that completely changed the morphological and functional context of the area.

During the communist regime, the buildings of the area were nationalized and inhabited by the tenants of the Municipality. Despite the lack of any public maintenance, the area remained very vivid, the food market was prosperous due to its central position and the vicinity of the North Railway Station.

Acest articol a fost publicat in Revista Zeppelin in martie 2011.